When we started the shoot, it was already completely dark outside. That is not such a difficult task to achieve when you live in the Netherlands like we do and try to do an outside shoot in the evening. At this time of year the sun already sets around 17:00 hours.

We shot some images of Luke against industrial buildings which came out pretty nice. After that we started shooting at a more open environment in the middle of the street. And somehow Thalita popped up in the images as well. In the end we added a second light and used that as a backlight. I think these images were pretty cool. 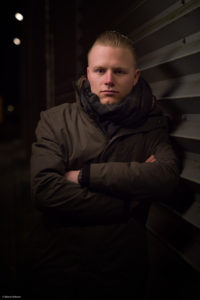 Luke – Leaning against the building 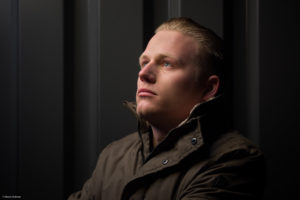 Luke – Staring into the light 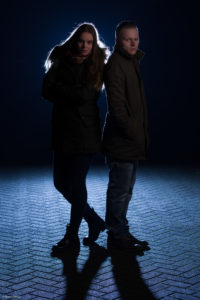 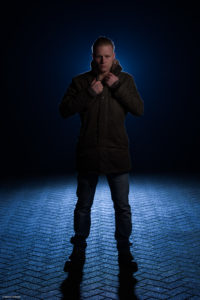 Luke – Tough guy in the night

We used a battery powered studio strobe with a small octabox to light Luke. In the octabox I added a CTO gel to match the color temperature of the tungsten lights a bit more. For the backlight, a second strobe was used. This strobe was mounted with a standard reflector without any color correction gels. Hence the blueish backlight which added to this mystic atmosphere very well. Talking about mystic … for a next shoot it might be fun to use a smoke bomb behind the model.

Thank you Luke for having this shoot with me. And of course thank you to Thalita for assisting me and adding up into the shoot. It was a cold but nice shoot.