I had a collaboration with a new model. I love working with new people because it is refreshing and sparks creativity. This time I did a photoshoot with Viviane. She can be a tough model but is also very capable of doing soft and female modeling.

You can find more about Viviane at:

However this shoot demanded the tough side of Viviane. We did some experimentation: playing with light. One of my favourite things to do. The base concept of this shoot were the gridded stripboxes. Usually you don’t see these light modifiers in the photo’s but this time they served as both light modifiers as well as props. I think they created a great effect.

To these stripboxes we added some blue background light supplemented with a touch of pink. And of course the smoke machine needed to do its magic tricks. You guys know I smoke right? 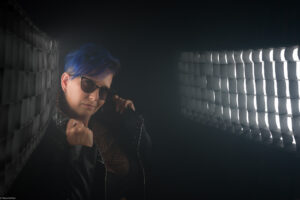 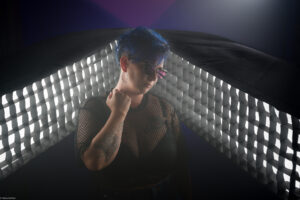 Viviane – What about that futuristic future? 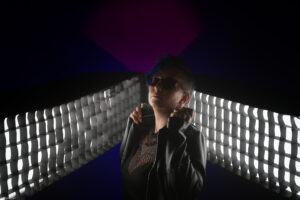 Viviane – Being cool at the center of the leading lines

All in all we had great fun and very cool results. Thank you Viviane for being such a cool model and being so enthusiastic about our lighting experiment. I had a great time.