I will only write the Corona word once. The world is flooded with information and disinformation about it. Since I am stuck at home like a lot of people around the world during this terrible situation I decided to keep on creating images. However for the safety of the models and myself I had to cancel all upcoming photo shoots. So what to do then?

First of all I finished my photoshop work and send the results to the models. These images will be shared on this website later on. And then I had to come up with some other stuff to create. So I decided to start shooting still lives and product shoots. Since I will not use the C-word again I will call these shoots ‘Home creativity shoots’ from now on. I realise that I post this blog message on April 1st but this is serious. No fooling around this year. More of these types of shoots to come.

So I thought about what to shoot first. I wanted to create images with black products on a black background. So after thinking a bit about that I found the perfect subject: my trusty old Nikon F5 analog camera. I have carried around this camera for years and filled a lot of films with it. When picking it up again it still feels like a great camera in my hands. So I decided to create a kind of hero shot of it with from a low perspective.

While shooting the camera I noticed the studio sound system aka the JBL Xtreme II blue tooth speaker which I use a lot during my photo shoots. So I gave that one a spin as well. This time from a higher perspective in order to show the blue light on top of it. And after that I couldn’t resist to take a shot of its small sibling as well.

For these images I used a light from behind to create the glow around the object and I filled the front with a soft light at a very low power. The brand and type names were lighted separately with a precision spot light. For the blue tooth speakers I combined their LED lights with my studio strobes. 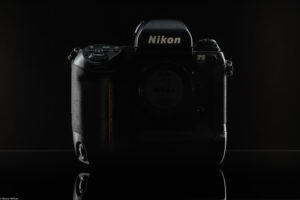 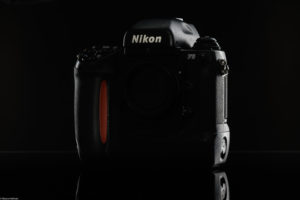 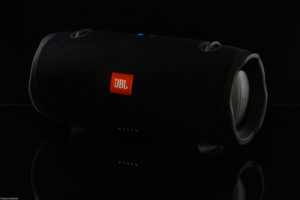 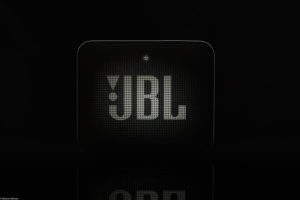 It has been a while since I did a product and I forgot how I actually enjoyed that relaxed pace and creative flows. The only thing I missed a lot what the communication with people like I normally have in my shoots. But lucky enough I still had the Xtreme II to provide me with some music while I was working.