Let’s start talking about pushing boundaries. This shoot in cooperation with Saskia of Flitsendbeeld.nl has been a boundary pusher with a capital B.

This time we decided to take the shoot out of the safe environment of the studio and decided to work in a chapel. That’s cool right? And it was not only the chapel that was new. We had a dark and moody blue environment in mind with a model acting as a main character in the images. And to add up to that moody atmosphere we added smoke. Lots of smoke. We wanted to create a feel of a dark interior in which rays of light shined through the chapels windows. So beside studio flashes inside the chapel, we also added a few strobes outside to create this effect. And if that’s not enough, we added a lighted candle with very low light output into the equation.

So we did a lot of preparation in the morning. In the afternoon our fantastic model Sharon came in and we started shooting. It was a difficult but great shoot and we had a great time. Here are some behind the scene images made by Saskia. 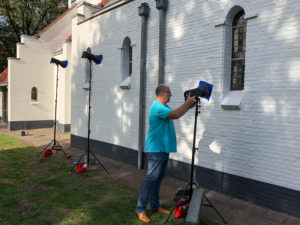 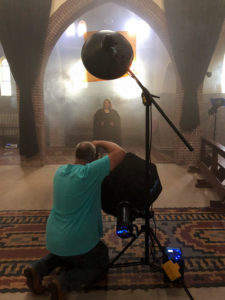 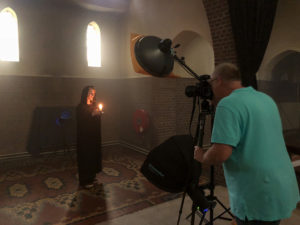 Sharon already liked the images during the shoot: And here are some of the cool results: 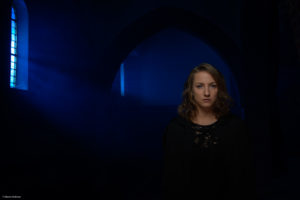 Sharon – Alone in the darkness 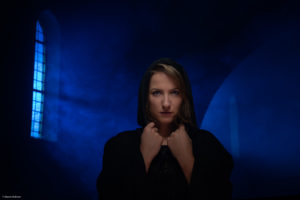 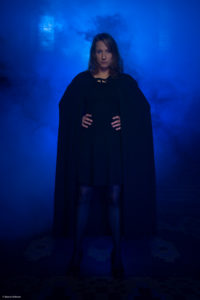 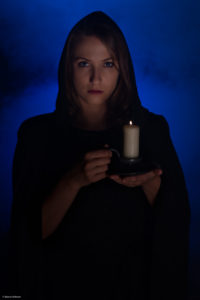 Sharon – The lady with the candle 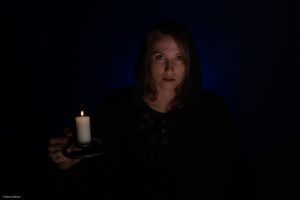 As already mentioned above, we used a bit more studio strobes for this shoot then we regularly do. As a key light we used a beauty dish. The shadows were filled with a second strobe with a small octabox. Outside we used three strobes with standard reflectors. At full power of 800 Ws most of the time. And inside we had an extra strobe with standard reflector to create effects inside.

So how did we create the moody blue atmosphere? The basic trick was to add a full stop color temperature orange correction to the key light and the associated fill light. That gives a too warm color temperature. So we corrected the white balance of the camera accordingly to a blue light around 2550 K. That gives a correct skin color and a blueish environment where the orange light has no reach. But the corrected white balance did not create the dark moody blue effect we were going for. So we added a two stops color temperature blue correction gel  to each effect light. And that creates this effect.

And now the next question you might ask: how did you manage to get that candle flame exposed with so much flash power around it. That actually quite simple: we put the camera on a tripod and lowered the shutter speed just enough to expose for the candle flame and not let in too much daylight.

So those where the photography solutions we came up with. And that leaves me to give a big thank you to the lovely and very patient model Sharon: thank you for being such a great model!