For a while I had the idea of creating some images of our studio assistants. For those who don’t know: our studio assistants are our Birman cats Chico and Ozzy. Their breed is also called ‘Sacred cat of Birma’. But they don’t behave that ‘holy’ in our opinion. But they remain our little saints. During photoshoots these guys are are in our way a lot of time. Which is actually a bad thing because they frustrate the proces flow of the photo shoot. But it also is a good thing to help people relax. So they are killing two birds with one stone. Figuratively speaking of course. For those who are interested: Chico is a blue tabby point and Ozzy a lilac point Birman cat. And they are brothers.

With Chico and Ozzy I wanted to shoot portraits in the same way as I shoot moody type head shots of people. So actually furry head shots.

So we set up the studio gear and picked up one of the ‘models’. Ozzy was the first one. He participated pretty well. Actually a lot better then I expected. After that it was the turn for his brother Chico. Usually Chico is a bit more cooperative to that would be easy. Well … not. That seemed to be a lot trickier then we thought. Chico was too much distracted to look into the camera. What ever we did.

But in the end we managed to get away with some decent portraits of with of them. But I can tell you it’s a lot harder to photograph subjects that refuse to take a pose. 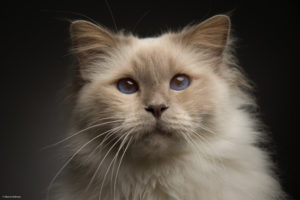 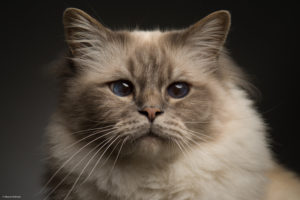 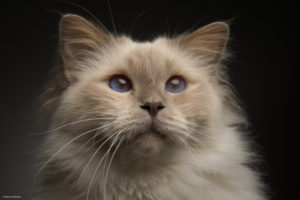 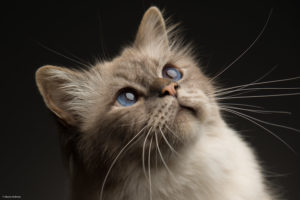 Chico – Looking into the light 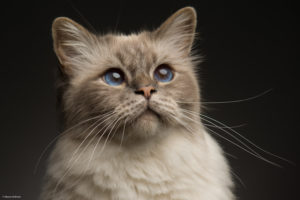 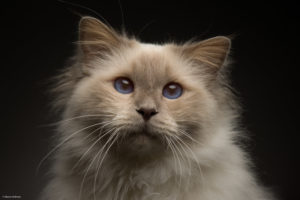 During the shoot I used a studio strobe with a small octabox as a main light and a gridded strobe aimed at the background to create that vignette feel.