I had a very nice shoot with Thalita. She is a member of the MARS Reenactment association. Check out their Facebook page. MARS is a living history group which keeps military history over several time periods and locations alive.

Thalia plays the role of a member of the WAC which stands for Women Army Corps. She represents a private rank of the WAC.

The WAC is part of the American World War 2 group of MARS. The WAC has been a branch of the United States Army which had women with three major specialities: switchboard operators, mechanics and and bakers. Thalita represents the mechanic speciality.

So during the shoot we took images of Thalita in het WAC uniform with two different hats. Here are some results of the shoot: 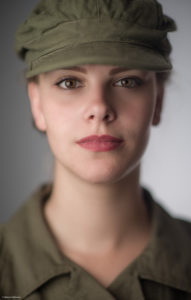 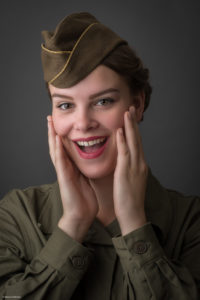 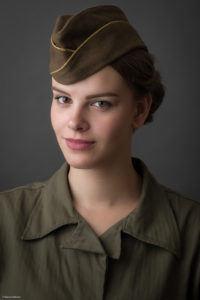 During the shoot I used studio strobes with large light modifiers to create a soft light.

Thalita is a great personality and very nice to work with. Thank you Thalita. I had a great time during the shoot.