Last weekend I had a fantastic life experience. However it was not only fun though. The Roparun team 132 Fighters Against Cancer invited me to join them during the run and take pictures of them. Of course I said yes. Fighting for a good cause always is a good thing in my opinion.

As I mentioned earlier in my blog post about the portrait session I did with them, the Roparun is a non-stop run from Paris to Rotterdam. The goal of the Roparun is collecting money to help people with the terrible disease cancer.

How dreadful this disease is, has been never more clear for the team than this year. Last year in August, the wife, mother, sister and aunt of several members of the team sadly passed away because of this terrible disease. One of the team members even lost his sister at cancer the week before the run started. He still fought along during this run. I told you they are heroes. And at the finish, the mother of another team member waited for him him and the team. She was able to wait for her son and the rest of the team with the fantastic help of Stichting Ambulancewens who made it possible for her to be at the finish despite her disease.

Beside that sadness, I haven’t experienced so much positive energy in a long time. And not only within the Fighters Against Cancer team, but also with other teams and people of the Roparun organisation. I take my hat of for all of you guys.

So Friday we started packing in Vlaardingen and after that we went to Paris and slept with the whole team in an hotel. Saturday morning we moved to a field next to Le Bourget, the airport of Paris. This field is used for preparation of the teams for the run and is also the starting location.

At 12:30 it finally was time: the start of the Roparun for team Fighters Against Cancer. Finally they could go on their way for a terrific journey through beautiful towns and landscapes in France, Belgium and the Netherlands for a length of 520 kilometers. During all these kilometers a runner from the team is running in an estafette mechanism. The runner is always supported by two cyclists. The team has two vans with subteams called Team A and Team B. Each team consists of 4 runners, 2 cyclists, a masseur, a van driver and a navigator. A team covers an etappe stage of  about 50 kilometers and is then being replaced by the other team. During the off time the team has to move to the next team changing location, eat, and sleep a little.

Beside the two operational teams there is also the team who takes care of building a campsite at each 100 kilometers and who take care of the catering. Both not the least important tasks during the run. And don’t forget about the team captain who has to organise all around the run and the teams.

The teams move at an average speed of 11 kilometers per hour. Along the way two incidents occurred which caused a delay in finishing time. A smaller incident in which a cyclist got lost of direction in the night. Luckily he had been found pretty soon though. And an incident with a bigger impact for the team: only 40 kilometers before the finish one of the runners got heart rhythm problems and had to be brought to the hospital by ambulance. A big shock for the team. As per request of the runner they went on with the run. And luckily the runner was released from the hospital pretty soon and was even able to cross the finish with the rest of the team. But they did cross that finish at Rotterdam!

During the run and preparations I followed them and took pictures. No artificial light this time. Here are some of the results. 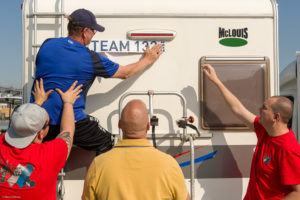 Bart, Hans, Gerard and Koen preparing the Camper in Vlaardingen 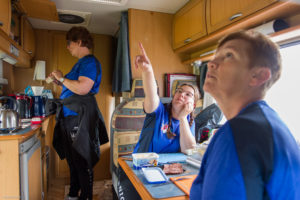 Marion, Kelly and Monique, busy with catering preparations in Paris 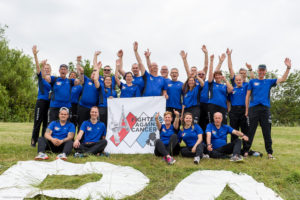 The fresh team ready to go in Paris 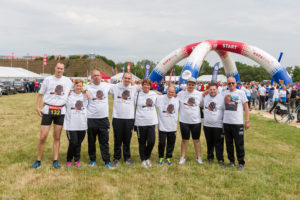 Team members with the lost ones on their shirts in Paris 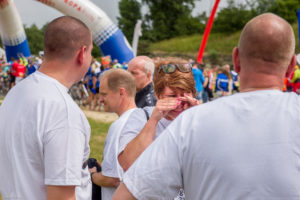 Sadness during remembrance of the lost ones in Paris 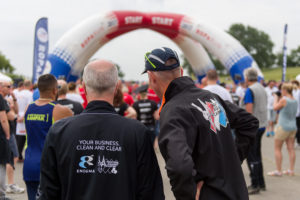 Ed and Peter at the start in Paris 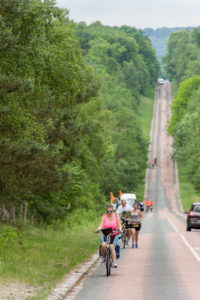 Nicky, Annamarie and Bart fighting the steep hill in Fontaine-Chaalis 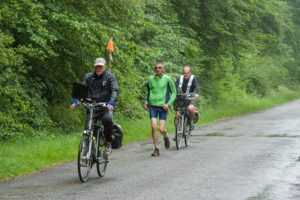 Ed, Peter and Maurice struggling through the rain in Lacroix-Saint-Quen 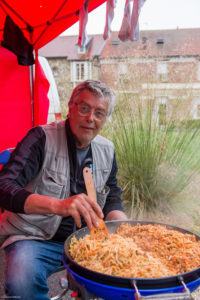 Adri preparing great food for the team in Lassigny 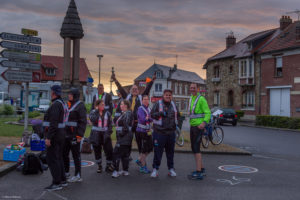 Part of the team during sunset in Lassigny 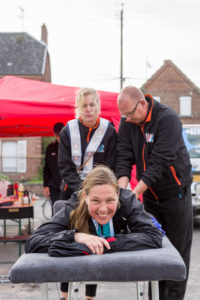 Sonja getting a double massage at the camp site in Betry 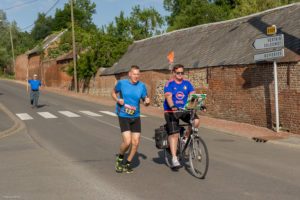 Karsten and Bart with a great cooperating farmer in Escarmain 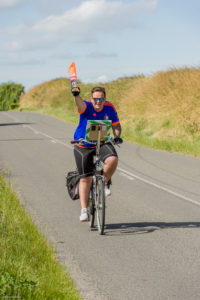 Yes, downwards is better than upwards, Bart in the fields of Maresches 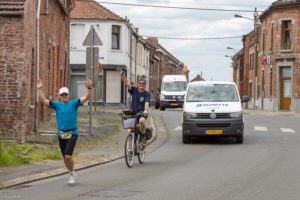 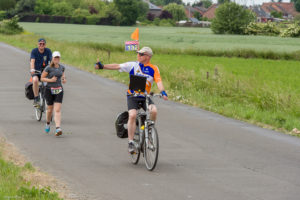 Ed shows what it’s all about: runner Sonja, with Ad at Boussu 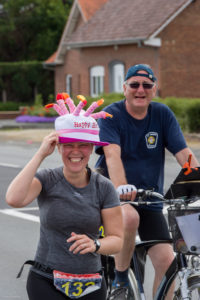 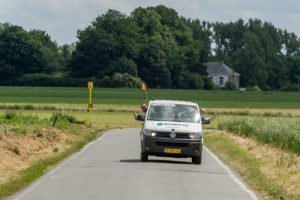 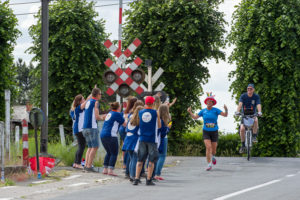 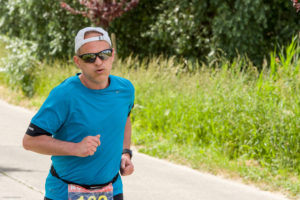 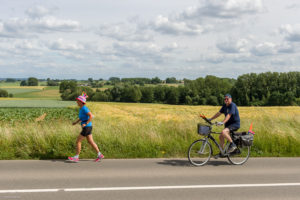 Mieke and Ad passing the beautiful landscape in Silly 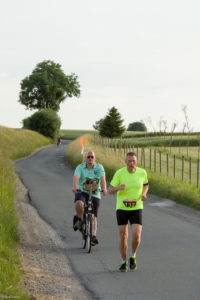 Karsten and Gerard passing through the fields of Asse 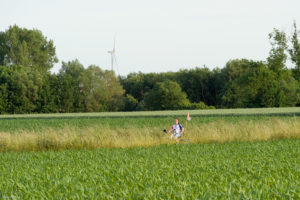 Nicky cycling through the Belgian landscape of Merchtem 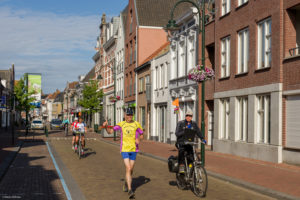 Ed, Peter, Mieke, Maurice and Sonja in the back passing through Steenbergen 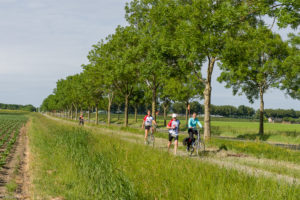 Sonja, Maurice, Mieke and Ed in the Dutch polder landscape 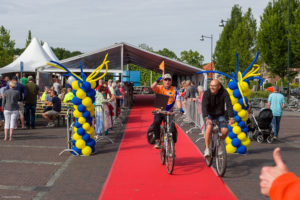 Ed cycling across the red carpet in Dinteloord 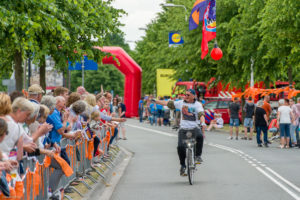 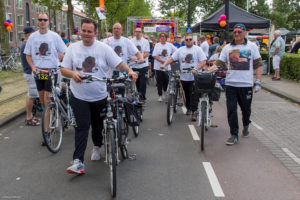 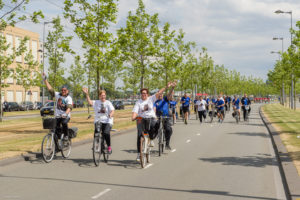 The final meters to the finish 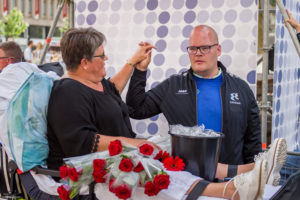 Gerard with his mother at the finish 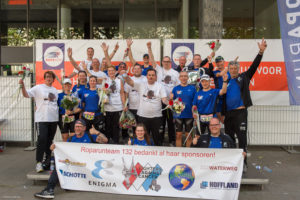 The rest of the images can be found at the Fighters Against Cancer website or their Facebook page.

So Ad, Adri, Annamarie, Arnold, Bart, Danny, Ed, Gerard, Gijs, Jessica, Hans, Karsten, Kevin, Kelly, Koen, Luuk, Maurice, Mieke, Marion, Monique, Nicky, Peter, Sonja, thank you very much for allowing me to join you. I have the utmost respect for you guys. You all did a fantastic job. It was an honour to be with you on this trip.